I mentioned in Image Journal # 19 that I was going to be a Partner Artist for the Alaska State Council on the Arts (ASCA) Latitude: 2014 Alaska Arts Convergence.

Well, what was that about?

I’m going to tell you.

ASCA put out an open call soliciting artists ideas about how to incorporate real art and performance into the Convergence which I think might be a fancy new buzz word for Conference, but I like it just same. Yngvil Vatn Guttu was our fearless leader in this endeavor. Yngvil is a musician, performer and artist organizer extraordinaire. Weekly, she lead meetings which involved herding cats and one very cubby beagle.

Occasionally, during the organization of this cacophony of artist events, it felt as if our heads might pop off or the sky might collapse and create a bunch of Alaskan Flat Stanley’s. Just the opposite happened. Each day of the Convergence was filled with sunshine and amazing collaboration. Throughout the conference there were moments of seemingly spontaneous Pop-Up Art. There was theatre. Here Allison Ward shares her performance “Calling all Polars Bears.”

There was movement by Pulse Dance Company.

There were demos during the day. Here is Kristin Link demonstrating her field sketching process. And Susan Share demonstrating book making techniques. 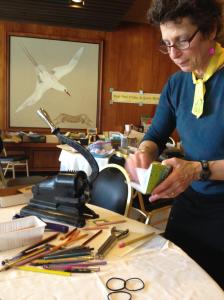 And even stilt walking through downtown!

I participated in two artist events. On opening night, there was a speed PechaKucha (pronounced Puh-Cha-Ku-Cha). The traditional PechaKucha is a 20 slide presentation. The speaker has 20 seconds for each slide to present their idea. It began in Tokyo in 2003 as a way for designers to meet, connect, and show their work. ASCA did a speed version. About 20 artists and art non-profits had 6 slides and two minutes to share what they were up to. The Wrangell Mountains Center shared information about our new residency programs.

I talked to the crowd about my Project EveryDay. It was May 1st, so it was great fun to tell people publicly what I was doing on the exact day it started! Of course, I was wearing a super cute outfit. 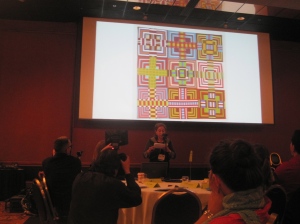 After the PechaKucha, there were appetizers and cocktails and this wacky photo booth where we dressed up and had our pictures taken.

The day ended with a fabulous ten o’clock sunset–I told you it was getting light up here. 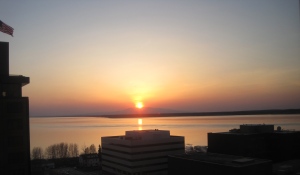 Friday evening, as part of the Convergence and Downtown First Fridays, there were 16 artists who popped up at 15 different venues. Convergence participants, as well as members of the general public who wanted to buy a passport, walked from venue to venue getting little signature works from each artist. The passport itself was hand made by Alaskan artist Susan Share.

Here are some signature and works I collected. I wish I had them all!

My artist signature included a sticker of my work and then a stitched doodle. Everyone got to pick their sticker, and then I did different stitching for different books. This was way fun. I met lots of people, had great conversations, and got to stitch while I was doing it.

After the madcap First Friday event, we walked down to Ship Creek for some amazing Thai street food by AK Street Eats.

No one ever really gets that I have Thai Tastebuds. This food bus was not afraid to bring on the heat, and that made me very happy. Kristin Link, the lovely lady on your right, is tired of hearing me talk about it.

The evening concluded at Anchorage Community Works with a wild Film Jam created by Michael Walsh and Michael Conti of Bunnel Street Arts Center and performances by Yada Di and DJ Kima. 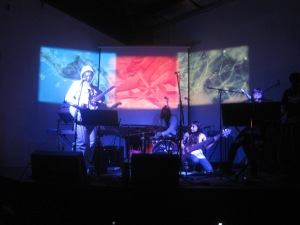 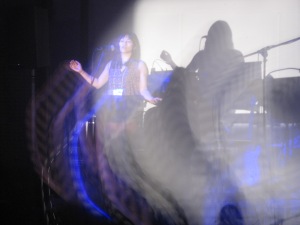 I cannot thank the Alaska State Council on the Arts enough for creating such a special weekend of events. Thank you!

If you want more, and I think you should, here is a great video of the event created by Pat Race. It’s really good.

Many of these photos (actually most of the good ones) were taken by Jeremy Pataky who was the director of the Convergence and owner of Overstory Consulting. Thank you Jeremy!

Like Loading...
08 May This entry was published on May 8, 2014 at 12:45 PM. It’s filed under Alaska, Art in Place, Just Plain Stories, News And Events and tagged Alaska State Council on the Arts, Latitude 2014 Alaska Arts Convergence. Bookmark the permalink. Follow any comments here with the RSS feed for this post.