Last week, I wrote fiber at the Fitton. The post was about the group show fiber which will be opening in October at the Fitton Center for Creative Arts in Hamilton, Ohio. I’m one of four artists who will be exhibiting in this show.

Today, I’d like to share the story behind my part in the exhibition. But first a an apology. I need to spend some serious time improving my photography skills. It is on the list.

In the beginning, there were Color Grids. I made nine of these for the Bellevue Arts Museum biennial High Fiber Diet in 2012. If you want to read more about that exhibit, you can by clicking here.

At first, I know this sounds dumb, it did not register in my wee brain that in order for the nine pieces to READ like one big grid they needed to all be the same size. You can see here, that these nine are ALMOST the same size.

I struggled with this, but once I figured it out, I went on to make many more grids all of which measure 38” by 38”. Nine of those quilts were exhibited at the Gallery Nord as part of the 2013 Surface Design Association’s International Conference in San Antonio, Texas where I was one of the featured artists.

Making these quilts is obviously an outlet for any obsessive compulsive tendencies I just might have. Many of these grids have close to 1,000 pieces of fabric in them. I do much of my work without rulers. As you can imagine, there are tricks involved. Here are eight of the nine Color Grids that will be at the Fitton. Yes, that’s right. I still have one left to piece and quilt. It’s the image that hasn’t been gridded out, but it will be soon. The design is locked in, and it is just about the stitching from here on out.

I liked the patterns I had created for these grids a lot. I decided to make some smaller ones which I call Solos. These are all 18” by 18”. They are a perfect size for a collector–hint, hint. Here are the nine Solos. I have pieced nine, quilted four, and faced two. 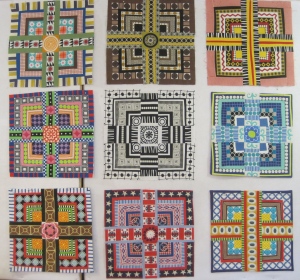 And here they are photographed individually.

Finally, I decided to see if I could get really small. I started making what I call Minis. They are smaller–twelve inch by twelve inch–versions of the Solos. It is harder to do than you would think. Some of the Solos easily size down, while others require difficult decisions.

My hope is that when I am done, I will have a nine year supply of SAQA auction quilts. I’ve got three minis quilted, and two minis faced.

Last of all, I take all the Solos and make them into a Party. There are many starts and stops in trying to get nine Solos that want Party together. It took several years to make Wall of Sound happen. But I did it. 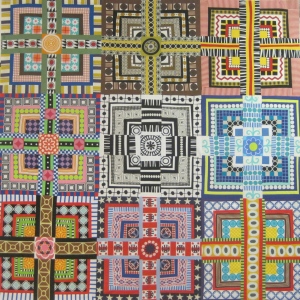 I really wanted to see all of my Minis, Solos, Color Grids, and their Party exhibited together. So, I pitched the concept to Cat Mayhugh, the curator at the Fitton. She liked it! So now it is happening.

Well, not quite yet. 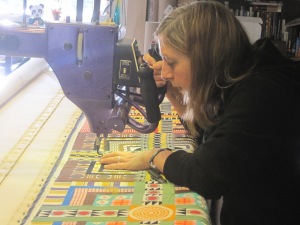 I’ve still got a lot of stitching to do…

Like Loading...
27 Aug This entry was published on August 27, 2014 at 5:17 PM. It’s filed under News And Events, Quilt Stories and tagged Color Grids, Fitton Center for Creative Arts, Mini, Party, Solos. Bookmark the permalink. Follow any comments here with the RSS feed for this post.

Older: fiber at the Fitton
Newer: Wall of Sound