In 2009, I received a Rasmuson Project Award to travel to Ohio and study with Nancy Crow for three weeks. Thank you Rasmuson Foundation for supporting and believing in Alaskan artists.

I have written about my adventures studying with Nancy Crow many times. If you would like to share in that experience, you can by reading the following blog posts.

Those three weeks were transformational. I began to  understand, in a way that I had not before, that if I worked hard, I could be an artist whose medium was the quilt.

So I set about doing that.

Each of the quilts from 2010 was either started in the Nancy Crow workshops or an extension of the ideas I had while there. 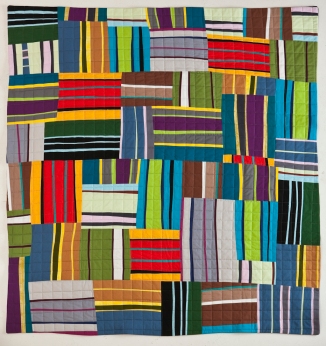 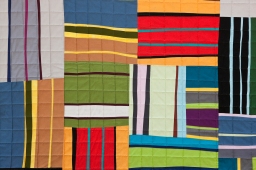 Many of these quilts are about merging what I learned at the Barn with what I wanted to do within the perimeters of the traditional quilt block. 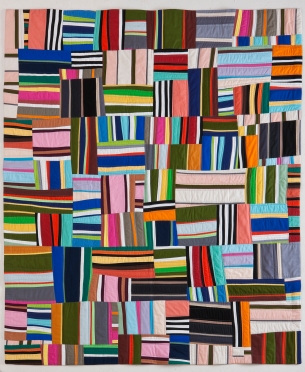 Ten years later, I am still exploring that space in my work.

Many artists, who claim the quilt as their medium, tend to shy away from the vocabulary found in traditional pieced quilt blocks.

I have been told MANY times, that the traditional quilt block is loaded down with baggage. That is one way to look at it. 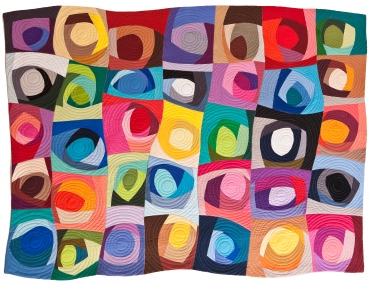 I see it differently. It is not baggage. It is history, and I am eternally grateful to the traditional quilt makers who came before me.

Artful Oven Mitts
It’s All About the Mitts

Coming soon–the Quilts of 2011. AKA as the year the Color Girds showed up. Thanks folks for following along.

Like Loading...
23 Dec This entry was published on December 23, 2019 at 4:25 PM. It’s filed under News And Events, Quilt Stories and tagged Crow Barn, Do a Little Dance, Fiber Optics, God's Eye, Good Vibrations, Good Vibrations II, Nancy Crow, Year in Quilts. Bookmark the permalink. Follow any comments here with the RSS feed for this post.